The notebook for this project can be found here

Wassenstein generative adversarial networks minimize the EM-distance between a generated distribution, and a true distribution:

A conditional GAN allows one to include a condition (as an input to the generator), that effects the generated data:

I want to see if I can include the y condition by simply forcing it to be a particular value. The WGAN critic simply the EM distance between the generated data and the real distribution, so by including y in the data, I convert the minimization objective to

This is quite easy, and for my experiment I’ve used data from one of 10 2d Gaussians. Here’s the real data-distribution, colored by y, the conditional: 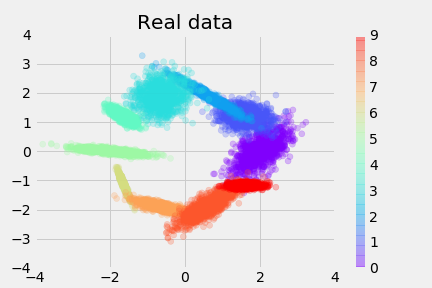 The generator’s structure is simply:

I use the improved Wasserstien training regularization method, rather than the clipping approach.

During each training step I do the following:

The notebook for this project can be found here

This worked great! By the 30-thousandth iteration, the generator was closely matching both the clusters: 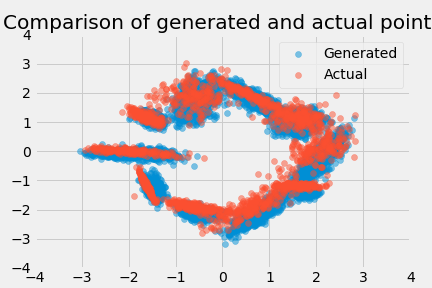 And the classes of the data: 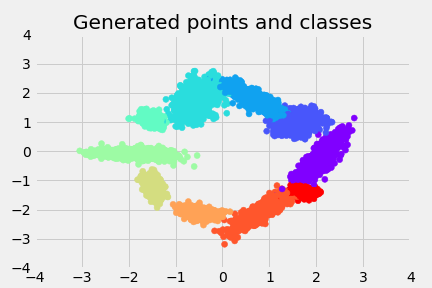 This means I now have a way to feed in conditions to a WGAN, and really easily generate data conditioned on it.

It’s also interesting to look at the scores of the generated points, so these are the “reviews” of the data: 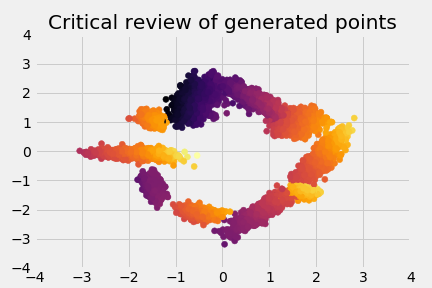 This leaves a few open questions:

It’s quite easy to make a conditional-WGAN, by simply: